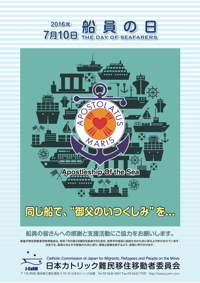 The Pontifical Council for the Pastoral Care of Migrants and Itinerant People has established the second Sunday of July (this year July 10) as the Day of Seafarers and has called upon pastoral ministers and laity throughout the world to pray for seafarers.

This year, we are walking together on the path of the Jubilee of Mercy. Each and every person in this world is loved by our Father, so we are called to love each other as members of our Father’s family.

In fact, however, the importance and difficulty of seafarers’ work is seldom known. On top of that, many people do not pay attention even to the fact that there are many people working on the sea. Perhaps that is because events on the sea are seldom reported, while accidents and terrorists’ attacks on land are covered at any cost.

Recently, it was reported that after the Great East Japan Earthquake, when a United States Navy aircraft carrier anchored off the coast of Fukushima as part of Operation Tomodachi in order to help affected persons, sailors from the carrier served without receiving any information about radiation spreading toward the sea. As a result, almost 2000 persons were exposed to radiation.

A similar event happened 60 years ago. On March 1, 1954, an ocean-going tuna-fishing ship, Daigo Fukuryu Maru (No.5 Lucky Dragon) was exposed to radiation from a hydrogen-bomb test conducted by the US on Bikini Atoll near the Marshall Islands. Radioactive dust called “ash of death” (shi no hai) from the test fell on the ship, and all the 23 crew members were exposed to radiation.

The difficulties that people working on the sea face are not natural threats alone. Although the sea is becoming even more dangerous because of nuclear test sites and dumping-of radioactive and other waste, most of such cases are hidden without being reported by the media. Seafarers and other people living with the sea, as well as all marine species are threatened and damaged by such human activities.

The sea is a marvelous gift of God’s creation. We must not contaminate the sea for the sake of human ego. All of us receive our daily bread from the sea through people working on the sea. Since we are all on board the same ship, we should pay equal attention to workers regardless of whether they are on the ground or the sea, and support each other.
On the occasion of the Day of Seafarers, let us pray once again for seafarers and their families.