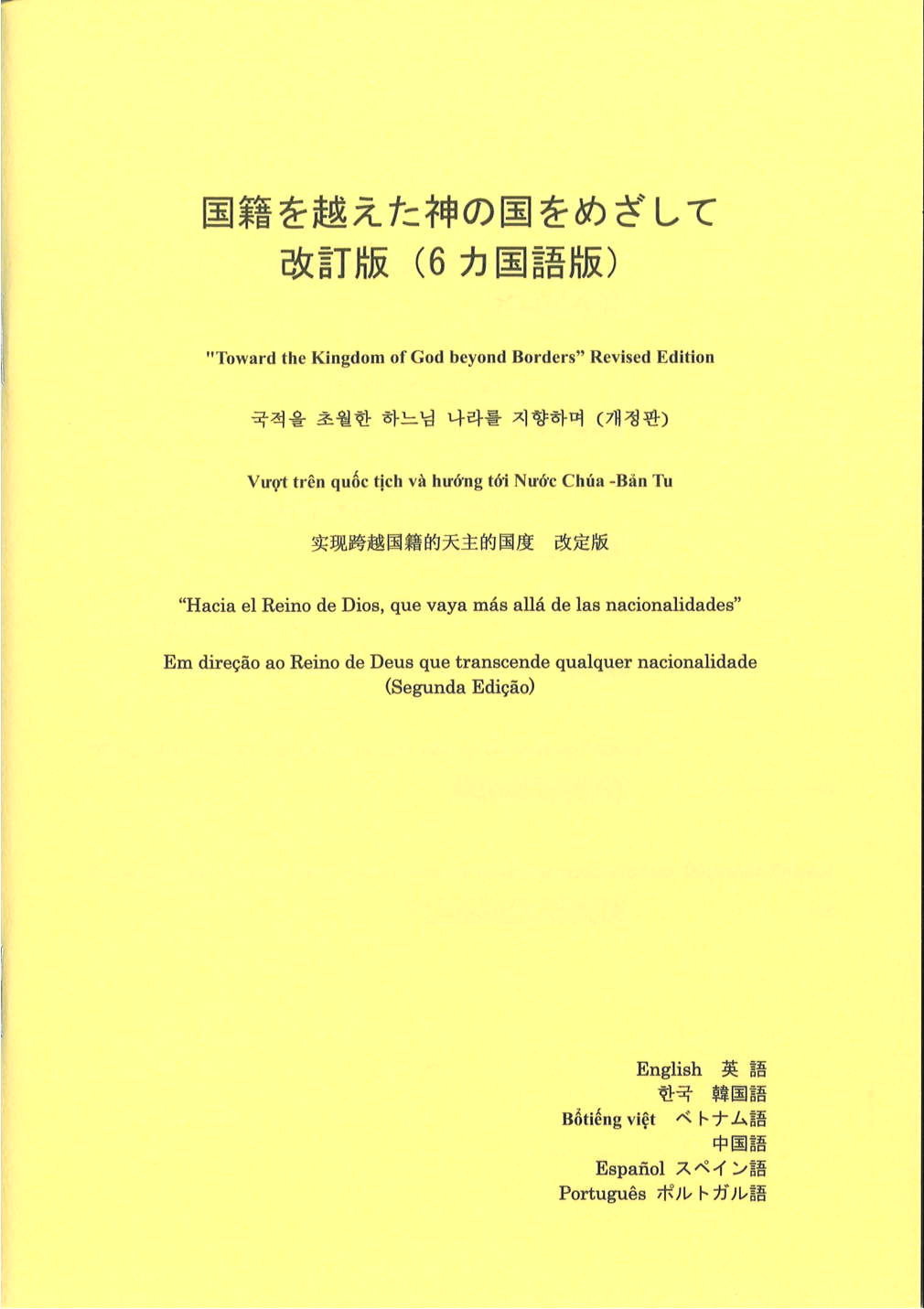 The Episcopal Commission for Social Issues of the Catholic Bishops’ Conference of Japan announced the message “Toward the Kingdom of God beyond Borders” on November 5, 1992, and on January 20, 1993, published it as a booklet addressed to the whole church in Japan.

In those days, immigrants had been increasing and many foreign Catholics had come to the church. Responding to these changes, Mass began to be celebrated in foreign languages. Japanese believers started feeling confused as they attempted to accept different cultures, while they were also delighted at an increasing number of people who shared the same faith. In small local churches where more foreign people participated in Mass than Japanese, some people felt confused about the churches consisting mostly of foreigners.

Under these circumstances, Japanese churches accepted migrants, refugees and people on the move as their friends, and responded to the call to accompany them and hear their voices.

In the twenty years since, the situation of foreigners has changed. After the financial crises precipitated by the bankruptcy of Lehman Brothers, a lot of foreign workers were forced to return home. However, more than in the past, many people were settled in Japan in international marriages and a new generation of migrants has arisen.

Even though services provided at the level of local government have improved, generally things have been not changed or have even gotten worse. Antiforeign hate speech, prejudice toward immigrants and measures against refugees by the government are all worsening.

The Episcopal Commission for Social Issues sees a need to reprint this booklet so that people who belong to the Japanese church will be able to think about how multicultural and multinational communities should be.

The Catholic Commission of Japan for Migrants, Refugees and People on the Move has verified the contents and revised some parts where circumstances have changed since the first printing.

We invite you to share and think about the progress that has or has not been already realized, and things that have become new challenges in recent years, comparing the present situation and the past.

We hope this booklet will be able to lead you to work for the community.

September 25, 2016
Sueo Hamaguchi, Bishop of Oita, Chairman
The Episcopal Commission for Social Issues of the
Catholic Bishops’ Conference of Japan

The church has a mission to embrace and accept people on the move and to serve them. We bishops have reaffirmed this responsibility and have decided to issue this message.

Immigration, the journey of encounter

1 “Immigration” is part of the history of salvation, a social phenomenon deeply involved with the growth of the Kingdom of God. Father Abraham left his homeland and started out for the land of Canaan by God’s command. Thus, the People of Israel was prepared as a homeland for the Savior. And the journey of people of God has continued and will continue until the Kingdom of God comes to complete the salvation of the world.

When Japan was not economically affluent, approximately a million people moved to North and South America and Asian countries. Currently the estimated number of descendants of people of Japanese ancestry has reached 3.5 million (cf. the website of the Association of Nikkei & Japanese Abroad, as of 2014), and there are quite a number of Catholics among these people. In recent years, the number of people of different nationalities visiting Japan which has grown rich is rapidly increasing.

There are approximately 2.3 million foreign residents in Japan, including illegal immigrants (cf. the website of Ministry of Justice). Among these people, it is estimated that there are more than 410,000 Catholics who come to the church.

1 Immigrants and their families
2 Spouses in international marriages
3 Children who have foreign roots
4 Technical intern trainees
5 International students
6 People from South Korea, North Korea, Taiwan and China who came to work in Japan or who were brought in Japan against their will in the colonial past before and during the war, and their descendants
7 Refugees
8 Seafarers from different countries
9 Victims of human trafficking
10 Foreigners who are jailed or in immigration detention centers

By encountering those people, praying with them and trying to share our lives in the church or society, we believe that evangelical change will be brought to Japanese churches and society.

2 In Japanese society, we see much discrimination and anti-foreign attitudes arising from a lack of understanding about the differences in race, gender, language, culture, lifestyle, religion etc. In the church, more understanding has developed along with the increasing number of foreign Catholics, but the attitudes described above remain.

As immigrants and their families have no social basis in Japan and their life is unstable, their place in society, workplace and community is tenuous. Immigrants are for the most part not protected by Japanese law, and so they are placed in a vulnerable position and they sometimes suffer inhumane treatment.

The Immigration Control and Refugee Recognition Act provides 27 qualifications for foreign residents in Japan. The Act also strictly controls the activities permitted due to resident status.

Over the past 30 years, people who have settled in Japan in international marriages temporarily or permanently have increased, but their rights are not guaranteed equally with those of Japanese people.

Under these circumstances, many problems are occurring. For example, the exploitation of technical intern trainees to compensate for Japan’s labor shortage, isolation of women in international marriages, damage from domestic and other violence, alienation of children who have foreign roots, inhumane treatment for illegal immigrants at detention centers, the lack of certification of refugee status and so on. The spread of antiforeignism as represented by hate speech is also a major social problem.

Beyond differences, the witness of universality of the church

3 We Christian are invited to be truly one in Christ.
We must not forget that for the Japanese church, now is the perfect time for that. The church is a community in which people of all generations should embrace each other’s differences by going beyond region, lifestyle or culture. Even the experience of friction and pain arising from each other’s difference becomes an opportunity for conversion as a community.
By engagement with conversion, the Christian community can become rich in diversity.

Making efforts to live with difference does not force others to adopt one’s own lifestyle, but leads to a new shared society and culture.

For the church, all are brothers and sisters in Christ. The Japanese church is not only for Japanese people. We can bear witness to the universality of the church by not only welcoming migrants, refugees and people on the move but by making efforts to build one community that transcends our various differences.

We can bear witness to the Kingdom of God that builds up new levels of humanity as we encounter people from different countries.

Saint Paul’s letter to the Galatians is precisely a message to us now:

We hope that people visiting the church and all people involved with the church will be able to find and share joy and happiness in encountering Christ in others.

The Challenge for the Japanese church

4 The fact that many people have left their families and homelands and moved to Japan and now live in a different culture is “a sign of the times” which continues to change even now. This “sign of the times” is a challenge for the Japanese church which is moving toward the Kingdom of God beyond borders, and presents possibilities for a new evangelization.

Actually, the good relations that lay people, Religious and clergy have with immigrants have drawn positive attention in various parts of Japan. However, a response to “the signs of the times” requires involvement not only by some believers, but challenges the whole Japanese church to such involvement every day. Major examples are as follows:

a) Dealing with civic movements and government:

1 Take initiatives and act for the protection of human rights against violations of human rights which occur at a high level. Work together on such problems as medical care, work injuries, unfair dismissal, unpaid wages, job and home searches, granting special permission for residence to overstayers, use of immigration detention centers, deportation for overstaying, domestic violence in international marriages, education for children who have foreign roots and others.

2 Examine necessary assistance to families in international marriages, hearing their opinions. Organize orientation meetings or seminars on the knowledge of the law, Japanese lifestyle, food and language.

4 Work with people whose human rights are ignored, resulting in their being deemed illegal, trying to secure a change in their status under the Immigration Control and Refugee Recognition Act.

5 Work on revising the Immigration Control and Refugee Recognition Act to make it one based on fundamental human rights. At the same time, work on enacting fundamental laws such as the International Convention on the Elimination of All Forms of Racial Discrimination and a Basic Law for Foreign Residents to respect foreigners’ human rights, and eliminate discrimination and anti-foreign prejudice.

6 Catholics should learn about the International Convention on the Protection of the Rights of All Migrant Workers and Members of Their Families adopted by the United Nations General Assembly on December 18, 1990, and participate in civic movements that work toward ratification of it in Japan.

7 Have more understanding of the economical and political background of relationships among sending countries, receiving countries, and transit countries, as well as other issues in solidarity.

b) Churches’ own challenges

1 Make further efforts so that Japanese churches will be able to bear witness as multinational and multicultural communities.

2 Each diocese and parish should make efforts to realize the following measures in cooperation with the Catholic Commission of Japan for Migrants, Refugees and People on the Move (J-CaRM):

・Develop communities in which foreign Catholics will be able to take part in the liturgy or Sacraments actively, respecting their ways of expressing Christian faith. Prepare liturgical texts in foreign languages, plan necessary workshops for faith formation.

・Encourage better communication among members of parishes regardless of nationality. As we all have the responsibility to build community together, people to be able to become full members of any parish.

・Consider providing more interpretation and translation for foreign Catholics so that they are not cut off from information.

・Give consideration to everyone, and to foreign Catholics in particular, to be able to participate in the meetings or the activities in the church actively.

・It is desirable that each diocese to provide a consultation service offering practical support.

・As church, we will build a system and a network to deal with various problems that foreigners face.

Let us carry out the terms outlined above, doing what can be done positively in different places, including seminaries and centers for formation of laity, Religious and priests.

May God, the Father of all humanity bless you all, and may God pour his love on our efforts toward the Kingdom of God beyond borders.

Please contact the Catholic Commission of Japan for Migrants, Refugees and People on the Move for English translations.

Please contact the Secretariat, Catholic Bishops’ Conference of Japan, for permission to reproduce this text by recording or font enlarging for people who are visually impaired or who for some other reason cannot read the plain text file in print.
That is not established for profit-making purposes.
Reproduction in Braille is permitted under the Copyright Act, first paragraph of Article 37.

Date of Publication of the revised edition
September 25, 2016